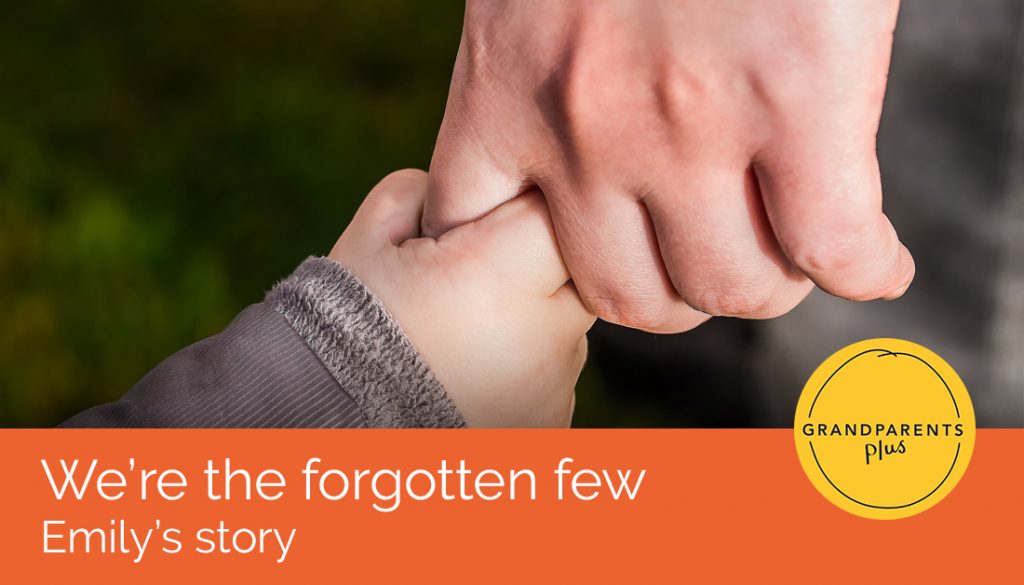 Emily lives with her husband Chris and they care for their grandson Paul aged 13. Ten years ago, the couple returned to the UK from Australia due to ill health and moved to a new town to forge a new life together. This initial upheaval soon quietened as they grew used to the change and began to settle in their new home. Emily told us, “we were quite happy in our new flat when one day there was a knock on the door and there were two social workers standing there.” The couple were informed they had the option to go to court to take their grandson Paul into their care, otherwise he would be put into foster care. This came as a shock, even though they knew things hadn’t been good for their grandchild and his parents. Paul was only 3 and a half at the time. Emily described to us the pictures Paul had drawn of them before this event, and how he illustrated them as parental figures. The couple had to make a quick decision. They had to give up their retirement and now faced a new and unexpected chapter of parenting.

The period after the aforementioned event was fraught with challenges, emotional distress and financial burdens. The wider family made proceedings incredibly difficult and it was a real challenge to keep Paul safe and shielded from events while they fought to keep him with them. They went through months and months of legal procedures, undergoing long and often distressing interrogations from various professional bodies. The dust didn’t fully settle for years, but after “a year of hell” they were able to start caring for Paul and leave the initial period of disruption behind. Due to the traumatic start to their grandson’s life he had developmental issues surrounding his behaviour, speech and general learning. Emily and Chris had to start from scratch and teach him how to do everything, catching up on almost 4 lost years of parental care and support.

Their journey began as a lonely one, with no support from family; although they received an additional year of support from social services due to the complicated nature of the case. But the support was light-touch, and Emily informed us she felt they were expected as grandparents to take the responsibility on independently; physically, legally, financially and emotionally. At the time the family didn’t have a kinship community to find support in, so were unable to seek out help and comfort from kinship carer networks or charities like Grandparents Plus. All they wanted at the time was to get the same support as other carers were getting, Emily told us, “I feel like as grandparents are being short-changed.”

As Paul got older it was clear that he was behind other children due to the challenging start in life that he had. He was eventually accepted into a special school, after experiencing bullying in a mainstream environment. Since he moved school, he has been a lot happier but due to the COVID-19 pandemic and lockdown he has become withdrawn and unable to continue his studies in full. It’s likely that he may have autism but due to the current lockdown his assessment has been postponed without a date. The family has adapted as best they can, but due to his condition and the need for various safety nets and structures schoolwork has been pretty much impossible. As Emily describes “you can’t fault his nature, he’s such a lovely lad. He just doesn’t like changes to routine”.

The family are strong and get on well. They said things haven’t got easier over time (after the initial upheaval), but they haven’t got harder either. They’ve evolved. New challenges come and the family takes these on with courage and strength. The main challenge for them is still the financial demands of bringing up a child on a pension.

We asked Emily what being a kinship carer means to her, “It keeps you fit, you keep going, and on top of that – you have somebody that loves you tremendously. We wouldn’t change anything.” Emily summed it up best when she said, “We need representation; we’re the forgotten few.” Carers’ Week is about making carers’ visible and raising the voices of carers of all types across the UK.

Grandparents Plus are doing everything we can to keep carers’ voices loud and clear. Thank you to all of you who have shared your stories, filled out surveys and contributed to our advisory groups – we couldn’t do it without you.

If you wish to share your kinship care story, please get in touch here.

The names and locations have been changed in this article to protect the family’s anonymity.