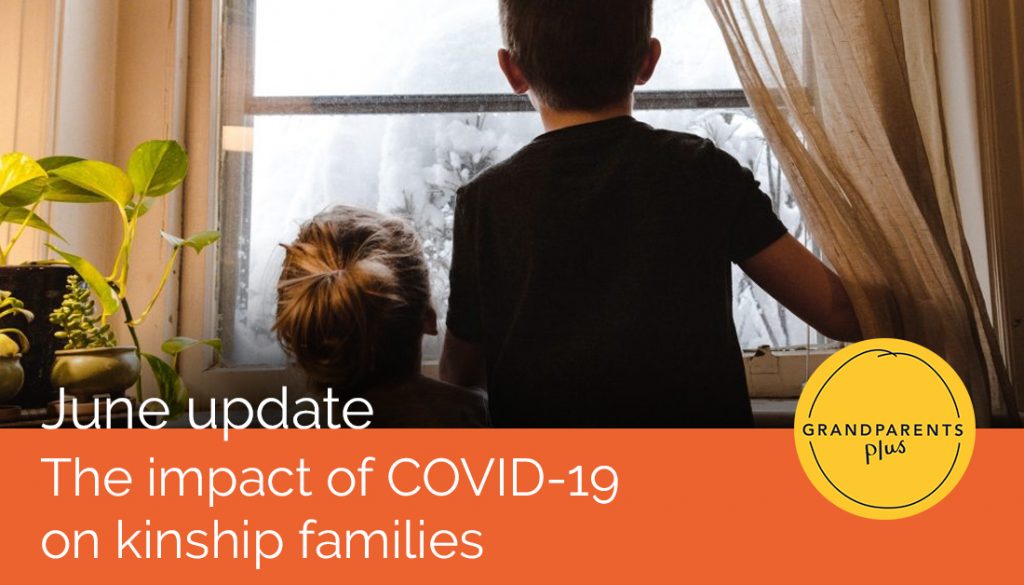 “Desperate for things to return to normal, but petrified at the same time. We can’t financially exist as it is, but we have taken the lockdown so seriously and don’t want to risk a second wave.”

“I am shielding so I can’t go out still. But the thought of going out until the virus is gone or a vaccine has been found scares me terribly”

Our first COVID-19 consultation was carried out on 18 March as the lockdown was first being rolled out. At this time many carers with additional health concerns were already self-isolating but schools were still open. There was considerable anxiety around what would happen to the carer if they contracted COVID-19 and who would look after the children.

Our second consultation was carried out at the beginning of May. At this time the lock-down was into its 6th – 7th weeks and suggestions about easing restrictions and schools opening to more pupils were starting to become more pronounced. The results of this survey showed the exhaustion felt by carers, their concerns over the well-being of the children in their care and their practical difficulties in home-schooling. There was also a return to the anxiety felt in the first survey of the impact of COVID-19 on them and their families if the easing of lockdown happened too soon.

This consultation was carried out between 8 and 18 June. At this point, the lockdown had become less restrictive with people who couldn’t work from home being encouraged to go back to work, an increase in the amount of time people could spend outdoors and discussions of further easing.

The results of the previous surveys can be read here: March | May.

Carers are now digging deep financially, emotionally and practically. After over 12 weeks of juggling work responsibilities with child care and home-schooling, trying to stay on budget while coping with the needs of a family at home all the time, carers have had enough.

The impact on kinship carers

We asked kinship carers if they had a message for the people in power and, if so, what? they told us:

“Yes. Remember us first next time. Get the support in place quicker.”

“Don’t forget us and look at all of us. Many of us seem to fall through the net under all circumstances because our children somehow didn’t meet the criteria of previously looked after and yet they have the same needs and issues.”

“We are the forgotten carers.”

57% (62 carers) have experienced practical issues, struggling with work and childcare, trying to do the shopping and filling the gaps left by the lack of activities for their children without a break or respite.

60% (65 carers) told us their financial situation has got worse, with some telling us they are now using their savings for day to day expenditure.

The impact on children in kinship care

71% (77 carers) say their children are struggling with the lack of routine, missing friends and family and not being able to do their usual activities.

42% (45 carers) believe their children’s mental health and behaviour has worsened as a result of lockdown.

“My granddaughter suffers with bad anxiety more at night. She finds it hard to sleep she keeps asking me if she is going to be ok.”

25% of respondents (27 carers) told us they are experiencing aggression from the children (an additional 2 carers had experienced this in the past). For many this included being hit or pushed. Oher aggressive behaviour included violent tantrums, verbal aggression, emotional outbursts and violence towards siblings.

“Punched, kicked, pushed and have things thrown at me on a daily basis. Also get screamed and sworn at multiple times a day. It’s like living in a domestic abuse relationship.”

The re-opening of schools

Schooling continues to be a difficult area for carers.

Only 14% (15 carers) whose children were eligible for a school place, due to being keyworkers or because the child met specific criteria at the start of the lockdown took this up. For those that didn’t take up the place the vast majority believed it to be too risky.

Anxiety remains high around the return to school. But the decision to send the child back to school was split evenly.

47% (51 carers) said they would send their child back to school if they were able.

47% (51 carers) said they wouldn’t, 6 carers told us they thought they would send their children back but wouldn’t make a final decision until they were sure it was safe.

Most carers who said they would send their children back to school did so because they felt that it was felt to be better for the child’s emotional health (23 of 51 carers) or for their child’s education (9 of 51 carers).

75% of carers who wouldn’t send their children back to school felt it was not safe to do so (38 of 51 carers).

“My child wanted to go back and be with her friends and teacher. I don’t want her education to fall too behind.”

“(Yes) For the routine and for the emotional side of things. I would rather her stay at home with me but in the long run it will have more effect on her mental health.”

On the easing of lockdown most carers remain anxious.

42% (45 carers) told us they didn’t think lockdown restrictions should be eased while.

21% (23 carers) said it would make little difference either because they were shielding or would simply continue to observe the stricter lockdown rules until they felt safe.

17% (18 carers) said they were worried but looked forward to more normality.

“Desperate for things to return to normal, but petrified at the same time. We can’t financially exist as it is, but we have taken the lockdown so seriously and don’t want to risk a second wave.”

“I am shielding so I can’t go out still. But the thought of going out until the virus is gone or a vaccine has been found scares me terribly”

“….Restrictions lifted too early as we are not out of this yet. We still obey the first rules – Stay at Home and Stay Safe.”

What needs to happen

Kinship carers have specific and urgent concerns and needs at this time. They were already a vulnerable and poorly supported group – the coronavirus makes them even more vulnerable, in terms of their health, pressure of caring for children, increased isolation and reduced access to local peer support. They are scared for their families and for what might happen. This situation is likely to continue for many months yet and even as restrictions ease, many carers will need to maintain isolation for some time to come. Kinship carers need tailored advice, practical resources and support from people they trust.

As one kinship carer put it:

“It’s about time we had more support from the government there just isn’t enough people to support in authority. If it was not for grandparents plus supporting us too, we would have no one.”

We also use this information to inform and strengthen our communications with decision-makers and in the media to make sure that the issues facing kinship carers are raised at local and national levels and help ensure that kinship families get the recognition and support they need.

If you need advice and support please visit our advice page. Please let us know if there is any other information you would find useful for us to add to our website by contacting comms@kinship.org.uk.

Please don’t forget to join our Facebook community and sign up to our Kinship Community to receive weekly news direct to your inbox.