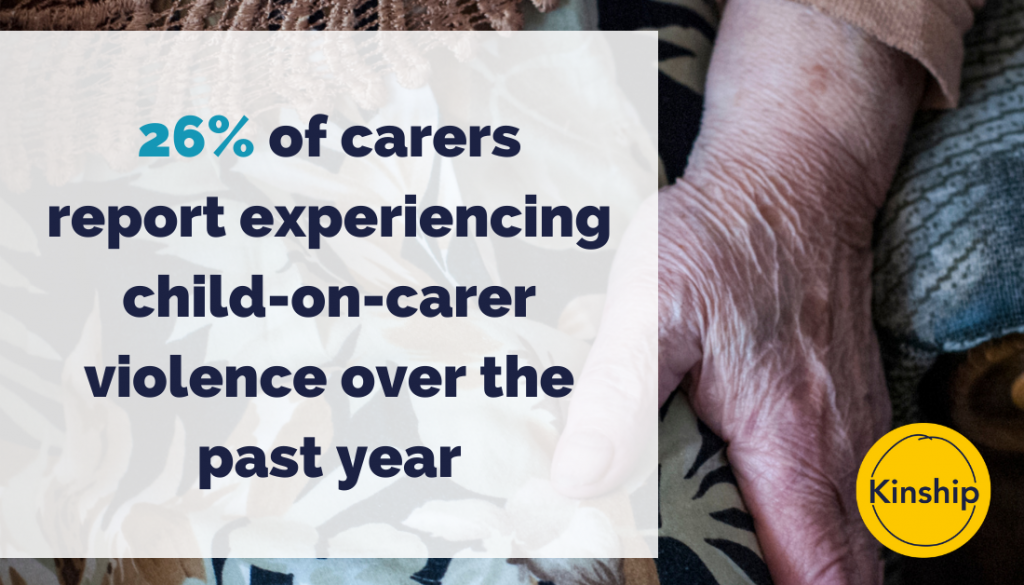 Kinship’s 2021 Kinship Care: State of the Nation survey revealed that out of the 1,651 kinship carers who responded, 26% reported experiencing violence from the child they care for.

This week, Channel 5 News released a shocking report about the rise of child to parent abuse. It was revealed that this abuse is much more common in adopted and kinship families.

Kinship carer Sharon bravely told her story after experiencing violence from her kinship child. “It’s soul destroying, there’s a huge lack of support. If we knew about the effects of trauma, and were given the right support to help them, it’d make such a difference.”

The kinship carers who reported experiencing violence from their children indicated that they attributed this to a variety of factors, including the effects of prior trauma, frustration and contact with parents.

Children in kinship care have often experienced some kind of trauma, and are often more vulnerable. Kinship’s survey revealed that 62% of kinship carers believe that their children have long-term physical and mental health needs, but 30% felt their children needed specialist support that they were not receiving.

One kinship carer said: “Whilst only a toddler, after contact (with parents) he hits me, bites, scratches, pulls hair, kicks the cat and has kicked strangers on the school run. When we have long periods of parents not showing up, he is more settled.”

Kinship carers believe that therapeutic support can help reduce their children’s violent behaviour. “He would get angry and smack me, especially after visits which is where the play/therapy would help. Things are calmer at the moment.”

However, it is worrying that 42% of kinship carers whose children did receive some kind of specialist support said they did not believe it was useful, suggesting that the support being offered is not right for the child.

Lucy Peake, chief executive at Kinship, commented: “I’d like to thank the kinship carers who have spoken out about their experience of child on carer violence. What is striking is that the kinship carers don’t blame their children. Instead, they are crying out for support and they are no longer prepared to suffer in silence. There must be a step change in support for all children in kinship care, including access to therapeutic support. Kinship carers also need training and support so they are able to understand the impact of trauma, neglect and abuse, manage their children’s behaviour. Without this support there is a risk that kinship carers won’t be able to cope and more children will enter the care system.”

Nicole Jacobs, the Domestic Abuse Commissioner, who recently released a report on Understanding Child and Adolescent to Parent Violence and Abuse told Channel 5 News, there is “vast under-resourcing, under acknowledgement that we’ve got increasing numbers of adolescents and children who are abusing parents and those parents need help.” She wants the government to fund a dedicated helpline.

The investigation revealed that in the last three and a half years, just ten police forces across the UK reported 92,000 incidents of violence towards a parent. In some cases, the children involved were as young as five.

Watch Sharon’s story and find out more about the report:

If you or someone you know has experienced child-on-carer violence, we are here to help. Get in touch.