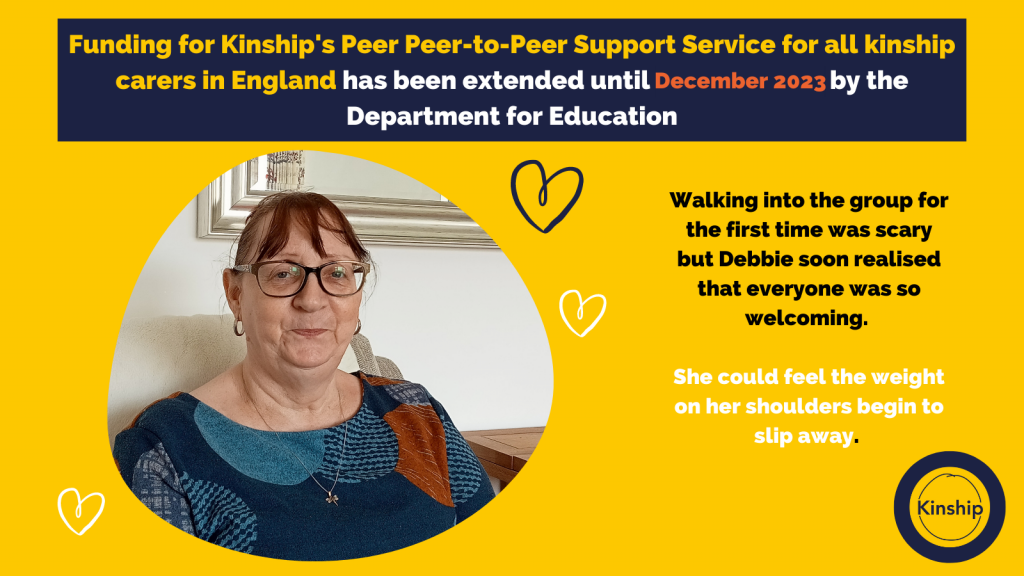 Kinship is thrilled to announce that the funding for of our new Peer-to-Peer Support Service for all kinship carers in England has been extended for a second year until December 2023.

What is Kinship’s Peer-to-Peer Support Service?

Our game-changing Peer-to-Peer Support Service, funded by the Department for Education and led by Kinship, is building powerful supportive kinship communities, and enabling kinship carers to support each other. The service offers online and face-to-face peer support as well as advice and information workshops to provide kinship carers with the tools to feel confident in their caring role.

What impact can peer support have on kinship carers?

Being part of a group with shared experiences and challenges is a great way to reduce loneliness and isolation and help kinship carers navigate the complex world of kinship care with clear guidance.

Debbie, one of our incredible kinship carers contacted us in 2021 and joined one of our peer support groups at a critical time.

Debbie has been a kinship carer for 13 years. She’s provided a loving home for her grandson since he was a baby.

Despite being a carer for so long, it was at the time when her grandson was moving to secondary school that she realised she needed extra help. Debbie found herself at a point of crisis – everything seemed impossible, and she just didn’t know what to do to help her grandson. Debbie reached out to school for support who introduced her to a support worker. The support worker found a local authority support group in her area and encouraged her to attend.

Debbie was so low and knew that her grandson had additional needs but just didn’t know where to turn. The support worker explained that this was a group for family members who had stepped in to care for children who would otherwise have gone into foster care or been adopted.  Debbie felt like she had nothing to lose and although anxious, with the support of the worker who drove her to the group, she went along to her first group in August 2021, unsure of what to expect.

Walking into the group for the first time was scary but Debbie soon realised that everyone was so welcoming. In that first session Debbie didn’t talk to anyone, just listened to the other carers. She could feel the weight on her shoulders begin to slip away.  She listened to incredible stories from grandparents, aunts and uncles and other family members about the joys and challenges that being a kinship carer brings for them.

What does her peer support group mean to her?

Debbie is a regular attendee at the group and now also meets with another independent group of kinship carers for a coffee and a chat every other week. Debbie goes to the support groups knowing that they are a safe space where she can talk about her worries without judgment and learn from others who are experiencing the same things. She also knows that she plays an important role in supporting other kinship carers when they need support.

How has her peer support group helped her move forward more confidently as kinship carer?

Debbie describes the support groups as a life saver. She has found the help, support and friendship she needed, and this help and support has in turn helped her support her grandson with his additional needs.  She describes how home is a much calmer place now as she has so much more understanding about how she can respond to her grandson in a way that better meets his needs. By attending the group in Mirfield, Debbie was also linked in with a Kinship project worker who offered 1:1 support and she is now accessing therapeutic support for her grandson.

What are Debbie’s hopes for the future?

Debbie is determined to keep attending the groups. She knows that caring for her grandson will not always be a smooth journey and that the group will be there for her. She is also keen to help the group grow and start fundraising to create special events for the children and young people in kinship families in her community.

Thank you to the Department for Education for its continued belief in our mission to provide peer support for kinship carers so they can receive more support, better access to expert advice and information, and more opportunities to connect with each other.

How you can get involved

If you’re interested in setting up a peer support group in your local area, become a volunteer.