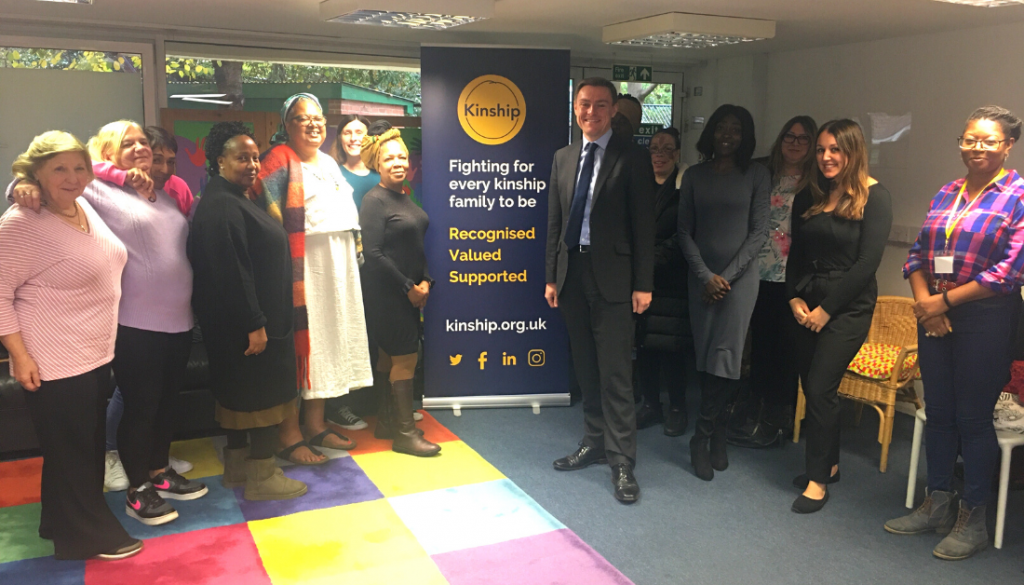 The Department for Education (DfE) has awarded a £1 million contract to charity Kinship for the development and delivery of a peer-to-peer support service for kinship carers across England, as part of a number of programmes and investments committed to earlier this year.

Will Quince MP, Minister for Children and Families announced the funding this morning at a north London Kinship peer support group.

The Minister heard from kinship carers about their experiences and the challenges they’re facing. He also heard about the transformational difference that peer support is making to their lives and their wellbeing and the children they care for.

Minister for Children and Families, Will Quince said:

“Kinship carers often make huge sacrifices to give vulnerable children and young people permanent, loving homes. Peer to peer support between kinship carers can be so important in offering a space for them share their experiences and challenges, which is why we are investing £1m to will help deliver more high-quality peer support for kinship carers across the country.

“It has been a privilege to speak with kinship carers and learn how impactful ‘peer to peer’ support has been for their journey.”

Kinship has a strong track record in providing high impact and sustainable peer-to-peer support groups, with kinship carers as group leaders. Insight shows that the groups deliver positive outcomes for carers and their children who often receive little other support. This is despite the children usually having had difficult experiences and the kinship carers often living in poverty, being socially isolated, older and in poorer health than other groups raising children – three quarters of children in kinship care are growing up in deprived households.

One kinship carer who benefited from the groups commented: “Kinship has been a lifeline. I couldn’t sleep, I was in a very deep, dark place. I can’t believe that I didn’t use this support earlier.”

The charity has been developing this innovative approach to supporting kinship carers since 2012, and the investment from the Department for Education will enable work to expand a local and regional model developed in the North East of England to the rest of the country.

The new Peer-to-Peer Support Group Service will provide support to kinship carers on a local, regional and national scale. It will create nine regional networks, a microsite, an online e-Learning platform and an online peer support chat. Peer support groups will be able to book free themed workshops on topics like ‘managing contact’ and ‘trauma attachment’. Access to specialist advice and information will be provided online and on the phone. The service will be co-produced with kinship carers and delivered both face-to-face in communities and online.

“Developing a nationwide peer-to-peer support programme will be game-changing for kinship carers across the country. Kinship carers who have benefitted from peer support services have reported feeling less isolated, better supported, and more confident.

“This commitment from government represents a really positive first step on what we hope will be a much longer journey to ensure that all kinship carers receive greater recognition and the support they need to enable them to provide the loving, stable and permanent upbringing that all children deserve.

“We are incredibly excited at this opportunity to use our expertise to develop peer support for more kinship carers whose lives are often turned upside down when they take in the children they love, and we’re looking forward to working with local authorities and partners across the country to reach as many kinship carers as we can “

A total of 18 paid roles will be created, and 100 Volunteer Support Group Leaders will be recruited and trained to build confidence and self-advocacy to lead groups independently. The service will also build up capacity for established kinship peer support groups, including independent groups.