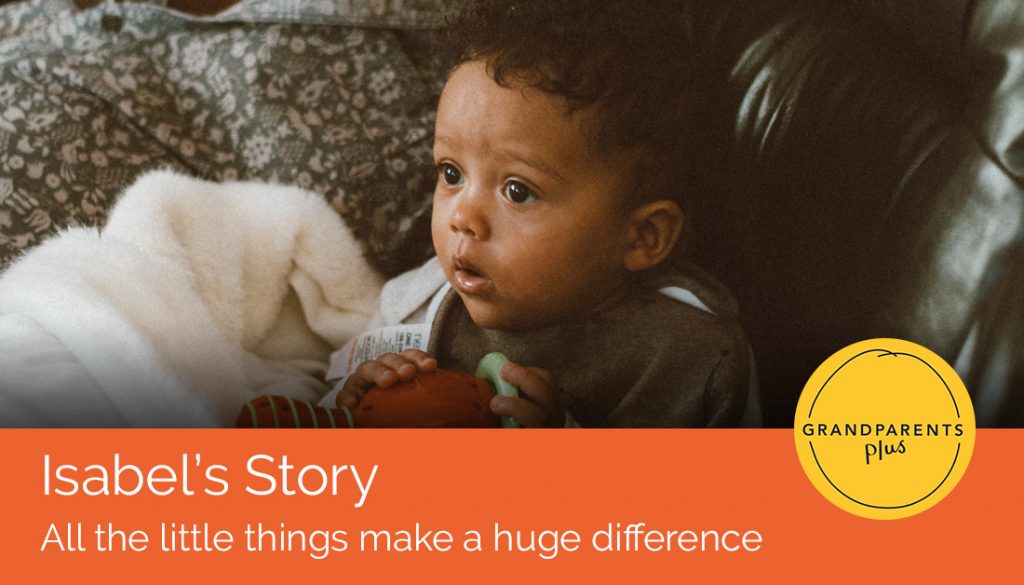 Isabel has described herself as a “Glamour Nan”, and we’d definitely agree! She is a mother and grandmother, with a huge heart and a great sense of humour. Isabel found Grandparents Plus when she started attending coffee mornings in Morrisons as part of her support group for kinship carers and special guardians about a year ago.

Isabel was fostered as a child, and although her experience of the system wasn’t necessarily positive, it allowed her to cultivate a strength and resilience, and taught her the importance of family. Like many kinship carers, Isabel’s sense of family has been the driving force through her journey to becoming a Special Guardian. Isabel has three adult children, and is a Special Guardian for her grandson, George. Isabel lives in London with her son, Danny, and George.

Isabel’s journey as a Special Guardian began two years ago. Already a grandmother and a mother of three, when her daughter told her that Isabel’s unborn grandchild was at risk of being “put into the system”, she stepped up to take care of him. There started the journey through the maze of Special Guardianship Orders. In the lead up to becoming a Special Guardian, Isabel moved house the same week as Danny went into hospital for surgery on his spine. Isabel slept on the floor next to his bed. When Danny came home a week later Isabel and the family had to immediately rally round; unpacking, cooking and helping Danny recover. She tells me how important that time was for her family – the support she gave, and also received, was key in helping him with a speedy recovery.

Isabel’s experience of social workers, the stress of navigating through the intrusive process of assessments and court, moving boroughs and the chaos of seemingly endless paperwork is all too familiar for many kinship carers. But Isabel reminds me “that to get through it, you need support. You need your family, you need your family to be there – fighting your corner, because it’s hard. It’s so hard”. She was called “difficult, aggressive and loud” throughout the process and made to feel like the enemy. Isabel told me that some of her social workers just didn’t treat her as a person trying to do the right thing. Isabel talked about how she felt that occasionally some social workers lack an understanding of cultural differences and she observes that this is a big problem in the system for black men and women and people of colour. Isabel said she knows that as a black parent there is an additional responsibility to prepare her son and grandson for some of the difficulties they may encounter due to racism.

“Fighting tooth and nail”, with tenacity and grace, and the support of her children, the Special Guardianship Order was granted two weeks before lockdown started. While it has brought many challenges, one thing Isabel reflects upon is how nice it is to have her order, and to have been left to get on with life – she is relishing being able to relax into her time with George. However, like many, Isabel misses the support, like George’s “Stay and Play” group. She misses the parents, the kindly chatter over packed lunches and handing over children, how thrilled she was to meet other kinship carers there. The lack of contact with the outside world has proved difficult for Isabel, however she is keen to tell me of the good things, like being able to spend so much time with her boys. We discuss how she takes time for herself; 20 minutes of TV, a cup of tea and a flash manicure – all the little things that make a huge difference. When taking on George, Isabel had to put her work on hold. Up to now she has achieved so much and its this strength that will see her pick up her aspirations in full, alongside her new family, once things settle down.

Danny is a great support; when he isn’t studying or completing his college work, he’s right at the heart of the action, playing with George and recognising when Isabel might need a quiet five minutes. The whole family cannot wait to be out again and being able just to hug and feel like the world is a bit more normal again.

If Isabel could give other kinship carers a piece of advice, it would be: be mindful, be honest, support and communicate. She adds: “Every child deserves to be loved, to be nurtured and to grow up happy; and no child is ever an exception to that”.